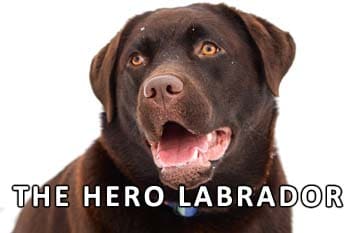 A 13 years brown Labrador with a rare genetic skills trained as a service animal and a rescue dog.

Moxie did a great service after the September 11 attacks in New York by saving people buried in the rubble. Even with Moxie’s poor sense of sight and hearing due to her age, she had a good skills of sniffing.. Once she picks up a scent of a person buried in the rubble she start barking instantly. She worked hard 16 hours a day for 8 respectively days hoping to save survivors!

After this tragedy, Moxie the Labrador Retriever breed became a famous hero in the United States.

Well this was the story of Moxie the hero lab, is your dog a hero too? Feel free to tell us in the comments section!

Are Labradors good as guard dogs?

Can Labs be used as guild dogs?

What are Labrador Retrievers ?

How did Labs get their name ?

When was the Labrador breed officially recognized ?

What can I name my Lab?

See also: Are Labradors good swimmers? Are their coats waterproof?