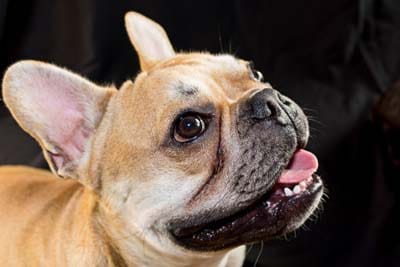 What are French Bulldogs?

Are French Bulldogs really from france?

No not really, the French Bulldog actually originated in the 19th century in England, but found its way to France with some hand workers from Nottingham (a city in England), the hand workers were looking for better occasions and jobs for themselves to help and support their families in England, as a result and during the same century, a lot of them migrated to France and took their little Frenchies with them, the toy bulldogs became very popular in France because of their temperament and cuteness and were given the name French Bulldog.
At the end the breed made its way back to England as a family friend and show dog, British citizens were not happy with the new addition “French” as they were originated in England, but finally the name French Bulldog stuck forever.

Is the French Bulldog a popular dog breed?

Yes definitely, the Frenchies are listed in the top 10 most popular dog breeds, by the end of the 19th century, the Frenchie’s popularity had spread across Europe and to America, and according to stats by the AKC (American Kennel Club) the French Bulldog’s popularity rank increased from 70st place to the 4th place in 2017, more than any other dog breed did. Also they are very popular among celebrities including singers and actors, and they were even featured in some movies as their best adored companions (Yes they make great character actors with their lovely personalities).

French Bulldogs have approximately the same characs to those of the standard Bulldogs, only in a mini scale.

How big are the French Bulldogs?

French Bulldogs are a small dog breed and they were bred to be a miniature version of the standard Bulldog which was quasi the most popular breed in England. The Brits really wanted a second small bulldog as a lap dog, and so the Frenchies were created.
Their size vary from dog to another, but generally there are two weight classes of French Bulldog: nineteen to twenty two pounds (9 to 10 kg) for the female and twenty two to twenty eight pounds (10 to 13 kg) for the male (And they should not weigh more than 28 pounds, making him easy to carry).
They stand at around 12 inches (30 cm) tall from their paws to their shoulders.

What colors do the French Bulldogs come in?

Like any other dog breeds including the classic Bulldog, the Frenchies come in many different colors and patterns, and it’s hard to choose one because they are all unique and good looking.

These colors are: All brindle, fawn, white, brindle and white, brindle is a coat with a speckled pattern of streaks and spots in light & dark colors like the black brindled coat, tiger brindled coat and a dark and white markings coat. They rarely come in solid black color, solid gray or black with tan and brown color. Also their fur is mostly short, shiny and fine.

Yes Frenchies are easy to groom, and considered as low maintenance dogs, keeping them clean will take just a little of your time and your effort, because they have a short, smooth and soft coat. Compared to other dog breeds with long coats, they don’t need such brushing, once a week is really enough for them, to keep their coat looking shiny and healthy. Also Frenchies don’t shed a lot of fur due to their short smooth coat.

Your Frenchie also need a regular bath to maintain the coat in a glossy look (every 2 months for example because we don’t want to dry out its natural skin oils), with a quality dogs shampoo (don’t use your own shampoo because it can damage the skin of your doggy), a towel or a hair dryer (you have to dry well your doggy, especially their folds of skin, to avoid a cold or skin infections), and maybe a cologne to keep your Frenchie fresh and smells good (also avoid the human cologne).

Also Frenchies need their nails trimmed regularly with a nail clipper or grinder to avoid overgrowth, their ears cleaned, to avoid a buildup of wax and debris (Never stick a cotton swab in their ear canal) and their teeth brushed too, and if their skin is dry, you can apply a little of baby oil to help sooth and heal the skin.

Do French Bulldogs have any health problems?

Unluckily, yes they do. Like all other dog breeds, these little flat faced dogs have the possibility to develop a number of genetic health issues. Apart their breathing and skin problems as we mentioned before, they suffer from some degree of Brachycephalic syndrome, which can cause some respiratory and eye problems. Also they usually suffer from issues with their backs, spines and knees that cause pain or paralysis (30% of Frenchies).

But thanks to science and veterinarians who can give these Frenchie puppies a test to see if they are going to have legs or back problems later in the future when they grow older.

Also according to some studies made in the UK, female French Bulldogs appear to be more healthy than males. And the most common health issues in French Bulldogs are ear infections, diarrhea and conjunctivitis (inflammation of the eye area).

Do French Bulldogs have sensitive skin?

Frenchies have areas of skin folds in their body (most common on their faces and shoulders), so it’s very important to always keep your dog’s body clean and free of dirt and skin flakes. And like that, scabs, infections, hot spots can be avoided and both you and your little Frenchie stay happy (remember an itchy dog can keep you up all night with its non stop scratching and licking).

Is swimming a good sport for French Bulldogs?

A question that many Frenchie owners ask! Is swimming a good sport for French Bulldogs? No not really, swimming can be a very difficult sport to Frenchies to practice due to the measured breathing that needs to be done. Like we said Frenchies can have some breathing problems because of their bad breathing system. Plus their compact size and heavy body, swimming can be taxing for them and most will sink like a rock if left alone, even if your Frenchie can swim a little bit, he won’t be able maintain it for long, Unlike other dog breeds such as German Shepherds, Labrador Retrievers, Standard Poodle and more.

But! You can leave your French Bulldog swim or teach him the “doggy paddle” if wearing a good and well fitting life coat or life jacket. There are life vests that are made especially for your little doggy to fit him and give him enough buoyancy to keep its head and body above water, so he can enjoy water and cool himself off, especially in the summer.

Also It is important to watch your dog any time he is near water and never leave him unattended, and never throw your dog into a lake, pool or ocean.

Another great and safer way he can still enjoy the water and cool off while having fun without any risks or worries, is to bring a kiddie pool for him and fill it with water up to its neck, this will make it easier for both of you and make your little Frenchie happy, and there are also collapsible kiddie pools for traveling!

Do French Bulldogs bark a lot?

Not really, Frenchies are very moderate and not excessive barkers. they do bark but not to any excess as other dog breeds do, especially the small breeds like the Miniature Pinscher and Jack Russell Terrier.

Frenchies tend to bark only when something is really worth it! And that’s what makes Frenchies good for apartment living, as they will not annoy your neighbors.

Also if you have more than 1 Frenchie, you may notice some differences between them, some will bark at things that others will not, for example some will bark at their shadows or reflection at the mirror and some won’t. Also some will bark if someone come near the door or someone is walking in the house in the middle of the night but some will ignore, but that doesn’t mean they are not good watchdogs, they are very smart and attentive, what makes them great guard dogs! And will let their owners know about something strange out of sorts as soon as they feel it!

Do French Bulldogs make any other noises than barking?

Another question that many people ask! Yes they do, and that’s what Frenchies are known for. Frenchies have short snouts in addition to some breathing systems problems cause they are one of the Brachycephalic breeds as we mentioned before, that’s why they find it hard to breath through their noses and easy through their mouths unlike the long snouted dog breeds. This results in some unusual noises coming from them, like grunting, breathing through their mouths making panting sounds and also snoring, Frenchie’s most common famous sound!
– They often snore when they are sleeping on the floor during the day.
– But even though, snoring can be very funny and cute sound coming from a little dog and won’t bother us, anyway!

How about French Bulldogs mating?

French Bulldog mating is hard, and they find some difficulties making pups and mating on their own. Most female Frenchies have very narrow hips which make it hard for male Frenchies to mount them. And usually when mating, they often require an artificial insemination, as their body make it hard for them to mate naturally.

And according to the AKC (American Kennel Club), nearly 80% of French Bulldog females are incapable of giving natural birth to their pups due to hip Dysplasia and have to have a Cesarean section surgery. And that’s why you cannot just start breeding your French Bulldogs by your own!
Also French Bulldogs have smaller litters than larger dog breeds, their average size of a litter is 3 puppies.

What can I name my Frenchie?

Here is the best 10 male and female dog names!

Some people name their pets human names, to help them becoming a real part of the family.

This was the best questions about French Bulldogs, if you have any other question feel free to ask us in the comments section!