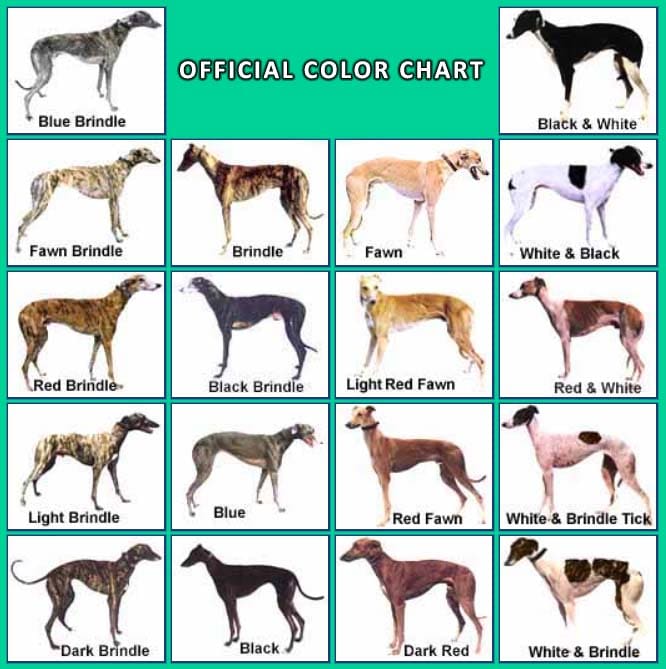 What are greyhound dogs?

How did Greyhound dogs get their name?

Where did Greyhounds originate from?

Are Greyhounds a popular breed?

What colors come in the Greyhounds?

So even if their name contain only the grey color, but there is a big variety of colors to choose from!
You can see the Color Chart below.

What eye colors have the Greyhounds?

Nearly all Greyhounds have dark eyes (dark brown eyes or black eyes), but it’s very common in little puppies to have cute green, grey or blue eyes like the eyes of a Siberian Husky. But these are just few exceptions and it does not mean that anything is wrong with the dog’s eyes. They are also as adorable as their dark colored eyes brothers.

Even if Greyhounds come in a variety of sizes and colors, but they have the same body structure.

How big are Greyhounds?

Also, many people think that the Greyhounds are big and considered like a large dog breed, but this is not true, when they are compared to other large dogs, they look really much smaller! So we can call them something between medium and large.

Are Greyhounds easy to train?

What is a Greyhound racing?

Greyhound dogs are also known for being very fast and hard working racing dogs that they can lose up to 2.5 kg in a single race!

Like we said before, their flexible back and their long legs help them to stretch and contract easily while running and give them maximum speed, the fact that they are in the air more than they are on their feet, by up to 80%, which means that their paws touch the floor only 20% of the time of the race!

Even if Greyhound racing became a less popular sport in many countries, it’s still popular in other parts in the world like the United States, United Kingdom, South Africa, New Zealand, Ireland, Australia and more..

Why do Greyhounds wear muzzles when racing?

Nearly all dogs don’t love muzzles, and you should not force them to wear muzzles in any case, only if they have some health problems or if they are very aggressive. But for Greyhounds, they only wear muzzles while racing for two reasons, the first one is protection, we all know that Greyhounds are very thin with insufficient fur, they are prone to some serious injuries, a small scratch which is nothing for other dogs, it can be harmful for Greyhounds, so the muzzles protect them.
The second reason is to make identifying the winner dog easily.
In addition, wearing muzzles at the race is necessary.

How fast are the Greyhounds?

During the race, their feet rarely when they touch the floor!

Do Greyhounds need a lot of exercise?

Greyhounds are like any other dogs, they need physical activities, whether they are old or young! It keeps them healthy, active and refreshed!

Greyhounds are known as racers and running dogs, so it’s better they have a regular free run outdoor in a safe area! But if you can’t or you don’t have much time, a simple walk or a jog (something about 30 min to 1 hour) is enough for them, where the dog is behind you leading the way with a leash. The type of activity doesn’t really matter, the essential thing is to give them a regular exercise routine.

Do Greyhounds have any health issues?

Another question that many Sloughis owners ask! Greyhounds, like many other breeds, are sensitive to anesthesia “a medical drug used especially in surgery and dentistry”, a regular dose that another dog can find it normal, it can actually kill the Greyhound. And that’s probably because of their thin skin and the lack of body fat as some scientists said. So make sure when visiting a veterinarian, that he is informed about your dog’s sensitivity to anesthesia before starting any type of treatment.

Greyhounds also suffer from Hypothyroidism “in which the thyroid gland doesn’t produce sufficient thyroid hormones that help to control a dog’s metabolism and health”, when the thyroid gland is not producing enough hormones, the metabolism will be slower, and your doggy could gain weight. Hypothyroidism also can cause other symptoms including: lethargy, low hormone levels, random heat cycles and sometimes can also cause them infertility.

One of the most serious health issues for Greyhounds is Osteosarcoma “a cancerous tumor that starts in the bones” and they have a high rate of developing it, the early caught the better and easier for them to survive it. So don’t hesitate to take your doggy to the veterinarian if you see him walking with a limp.

What can I name my Greyhound?

Here is the best 10 female and male dog names!

This was the best questions about Greyhounds, if you have any other question feel free to ask us in the comments section!

See more: Do Greyhounds have any unusual or funny habits?