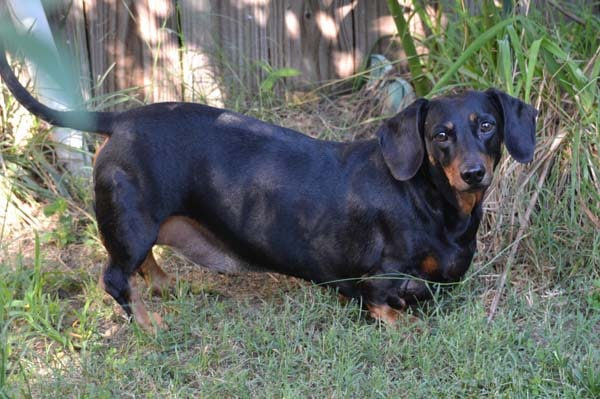 Are Dachshunds a popular dog breed ?

Absolutely yes! It’s one of the most popular dog breed in the world! It was listed top 4/10 in 2001 by the KCA. They are active dogs with surprising stamina, friendly, sweet, and cuddly. And that’s what makes them likable and lovable by most people. A huge number of famous celebrities also love them as well, including Clint Eastwood and Adele Louie. So yes the sausage dogs are becoming more popular day after day!

How did the Dachshunds get their name and it’s meaning!

The word “dachshund” is of German origin, meaning “badger dog”, the word “Dachs” means “badger” and the word “hund” means dog (hound). Dachshunds are small hound breeds who were bred to hunt badgers, rabbits, foxes and other animals that lives in tunnels/holes like the German hunters desired centuries ago.

What’s the origin of Dachshunds?

The Dachshunds originated in Germany! As hunting dogs, the purpose they were bred for. Even if some scientists have stated that the Dachshunds have the ancient Egyptian origins, they are widely considered of German origin.

The Dachshunds come in 3 varieties: short haired, wire haired and long haired with different colors, sizes, coat types, and personalities, but most of them have a few things in common:
The legs are short and stubby with large paws which help them for digging. The body is long like a sausage, little muscular, makes them great hunters. Also they have a deep chest and a long snout.

What colors come in the Dachshunds?

Even if there are three categories of Dachshunds, all of them may obtain the same color.
The Dachshunds come in many different colors and shades.
Some come in only one color like:

Some come with one color in the body and other color in the feet, ears or snouts.
And Some come in a variety of combinations of colors including black, tan, fawn, beige, blue, chocolate, and red.
There is always a Dachshund to suit almost anyone!

What eye colors Dachshunds have?

There are many types of eye colors that a Dachshund displays, depending on the dog.
If the dog have a light colored body well he tends to have amber eyes, light brown eyes or green eyes!
If the dog have a dark colored body, he tends to have darker eyes, like dark brown, black etc..
And finally, in some rare situations, some dogs can have two different eye colors, for example one eye is blue and the other one is brown.

What’s the types of Dachshunds fur?

Another question that many people ask! The Dachshunds come in three types of fur, the Wire haired, Long haired and the Short Haired.
Both the short and long haired fur are typically very soft, fluffy and shining what makes them different from the Wire haired ones.
The Wire haired Dachshunds look more like a Wire Hair Fox Terrier, and from it we can say that their fut is not that soft but kind of curly and pale.

Do dachshunds have a good sense of smell?

Like we knew before, Dachshunds are good hunters and can smell their miles away targets, so clearly YES they have a strong sense of smell, they have over 120 million cells of that sense while we human have only 4 millions.
Dachshunds are able to smell fear, anxiety, and even sadness, they can also smell some odors even if they are weeks old.. like any other dogs with great sense of smell including the Belgian Malinois, Labrador Retriever and German Shepherds.
Finally if you have a Dachshund, don’t try to hide your feelings and fool them with a smile on your face :).

Do Dachshunds have a good sense of sight?

Like all other dogs, Dachshunds see the world in black, white and grey colors, they have a better side vision than humans do (up to 240 degrees depending on where their eyes are positioned), they have also a better night vision and can see slightly better in low lighted places than a person can.
But what’s Dachshunds are most known with it’s their ability of detecting movements from far distances even if they can’t tell how far it is.

Do Dachshunds have a good sense of hearing?

The sense of hearing is top 2 to Dachshunds after the smelling sense, they have a great sense of hearing! They can pick up a sound that the human ear can’t detect (up to a distance of four times better than humans), what makes them quite sensitive to high frequency sounds and music. Sometimes a sound that sounds a little loud may frightens your pooch. But the advantage of this, is that trait helps them a lot as hunting dogs.

How Good is Dachshund’s Sense of Taste?

The Dachshunds have the same taste classifications that other dogs do.. they can identify sweet, sour, salty and bitter food, especially when eating salty or sweet food..
But sometimes it’s more complicated, they can eat the wrong things without any sense of taste, so it’s very important to keep an eye on them when eating.
The Dachshunds are also omnivores, which means they can eat food from both plants and animals, which may include eggs, bugs, some plants and more.

What kind of Temperament do Dachshunds have?

Dachshunds are very clever, courageous dogs, and like we all know they are good hunters, the thing that makes them very self confident.
Dachshunds are also stubborn and hard to train or take commands, but with time and a little effort they start learning how to live by the rules of their owners.

Yes, sometimes they are! When seeing something unusual like another dogs or people they are not familiar with they can be very aggressive and fearless even if these strangers or dogs are twice their size.
They are also loyal to their owners, so they feel when to protect them if they are in danger.

One of the most asked questions about Dachshunds! Yes the dachshunds are very friendly and sociable, they like to be around their owners and families, spend time and play with them.
They like also to be in a physical contact with their owners, like being cuddled, groomed or caressed.
The Dachshunds are not that type who loves to be alone at all, when they are alone they may get anxious or afraid.
Also they are quite shy toward other pets and strangers.

Are they friendly to kids?

No not really, the Dachshunds are not good to kids and they can be a bad option for kids only if you grew up your Dachshund puppy with them so they can familiarize each others with some good and relaxed experiences. With that you can reduce the risks if you are really into Dachshunds.

Dachshunds and their strong behavior!

Like we know, Dachshunds are sometimes unfriendly toward unfamiliar persons or other pets, whenever they see a stranger stepping into their turf they start barking, which is the most common issue with the Dachshunds, but just because they have a strong forceful personality.
Dachshunds are also known for being difficult, what makes them hard to train, so it’s important to their owners to stay patient and teach them how to be mannerly.

Do Dachshunds have back and spinal issues?

Yes, the Dachshunds are prone to back problems due to the way their body are built, they have an extremely long spinal column and a very short rib cage, what makes their backs easy to get injured.
More than 20% of Dachshunds suffer from back pain and spinal issues and which may get worsened by obesity, jumping, or extreme exercise.
Well thanks to the veterinarians who now are able to heal these little wiener dogs and relieve their pain.

Is there a special grooming for Dachshunds?

Not really, In fact Dachshunds owners can be able to do their own grooming, even if most of them look for a professional groomer to do the job.
Anyways, you should trim your dog’s nails frequently to avoid overgrowth or breaking.
The ears should be checked and cleaned frequently to avoid the growth of ear wax or any infection.
Finally you should also brush your dog’s teeth frequently so you don’t leave a place for bacteria to grow!

The Dachshunds are very active dogs, that’s why you need to walk them every day(a short walk will be sufficient), they also like to play and hangout in large open surfaces, just pay attention to them while playing, because intense exercise or jumping may lead to back or spinal injury.

Do the Dachshunds need a backyard?

Yes a backyard can always be a plus for Dachshunds, but even without it they will be fine cause they are quite active indoors. They are also good for apartment living.

2 thoughts on “Most asked questions about Dachshunds”