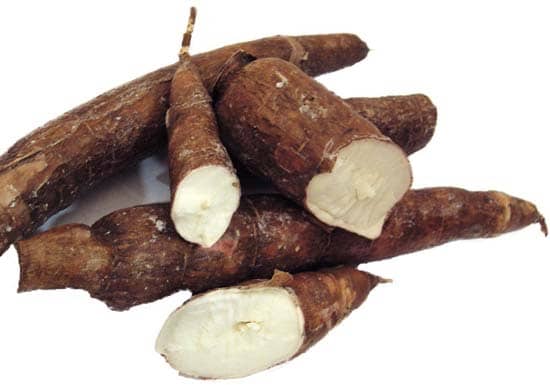 Many dog owners ask can dogs eat cassava? The short answer is Yes, but before you let your pup eat it, there are some things you should know!

Well, Cassava (Manihot esculenta), is a woody shrub native to South America of the Euphorbiaceae family. Raw cassava is high in calories, it contains 160 calories per 100 gram serving, which is quite high compared to other vegetables. For example, the same serving (100g) of potatoes provides 77 calories, and the same amount (100g) of Broccoli provides only 34.

Cassava root is a good carbohydrate source, and poor source of protein. It contain 60% to 65% percent of water, 20% to 38% of carbohydrates, 1% protein and a comparatively low content of vitamins and minerals. Despite the very low amount of protein, the quality of cassava root protein is fairly good in terms of essential amino acids. Also, cassava roots are very rich in starch and contain small amounts of calcium, phosphorus, and vitamin C (21 mg per 100 g).

So can dogs eat cassava? Yes and no. If your dog ate a small amount of cassava, she’ll probably be fine and there’s no need to worry. But large amounts of cassava can be harmful and toxic to your dog and even to us humans. This is because raw cassava contains chemicals called cyanogenic glycosides, which can release cyanide in the body when consumed, and if eaten frequently and in large amounts, this increase the risk of cyanide poisoning.

Protein is essential for all the body’s vital functions, to build and repair tissues, and for eliminating certain dietary toxins. With the help of the enzyme rhodanese, the human body detoxifies cyanide by forming thiocyanate.

Eating cassava in a diet that is deficient in protein, the plant’s cyanogenic glucosides can lead to poisoning. That’s why eating some protein along with cassava may be beneficial, and can helps rid the body of toxic cyanide, even if cassava is improperly processed.

Here are some ways you can make cassava more safer for consumption:

In general, cassava is not a food that you can eat all the time as a regular part of your diet.

1 thought on “Can dogs eat cassava?”