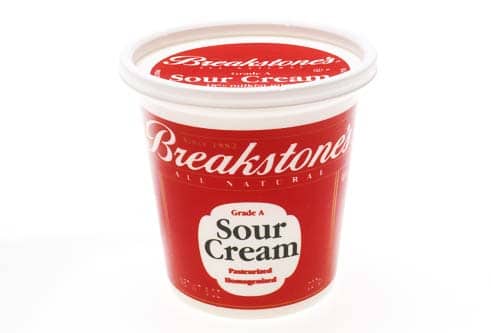 Many people ask can dogs eat sour cream. The short answer is Yes, but before you let your pup eat it, there are some things you should know!

Well, Sour cream is a popular fermented dairy product that’s consumed in a variety of ways.

While sour cream is a popular food, many people have intolerance or allergies and can’t/don’t want to use/eat it.

So can dogs eat sour cream? Yes and no! If your dog isn’t a lactose intolerant, you can give it to him without any problems, sour cream is not toxic to dogs but some dogs may experience a mild transient bout of vomiting or diarrhea purely due to the sudden intake of an unusual food source.

Some dogs have some problems digesting milk and dairy products, this inability to digest milk is infamously known as lactose intolerance. Lactose intolerance is common in dogs as they transition out of puppy-hood and no longer rely on milk as a primary source of nourishment, and a large amount of sour cream will usually make them sick, too much lactose will resurface as gas, vomiting, or diarrhea.

Sour cream contains also large amounts of pure fat, which are not good for dogs, and can lead to weight gain and sometimes to some health problems. That’s why if you are not sure about your dog, sour cream should be avoided. But generally, small amounts of sour cream shouldn’t cause any substantive problems.

Also sour cream has less lactose than milk, so if your dog is fine with milk, you can give him sour cream without any problems.

If your dog ate sour cream, she’s probably fine and there’s no need to worry, sour cream as we said it’s not toxic to dogs, but dogs who have problems digesting dairy products, they may experience a mild transient bout of vomiting or diarrhea, but this is not something you need to worry about and if it should occur most cases will resolve on their own.
Also, pay close attention to see if your dog needs to go outside, and be ready to clean up any messes.

Read next: Can dogs eat mint?